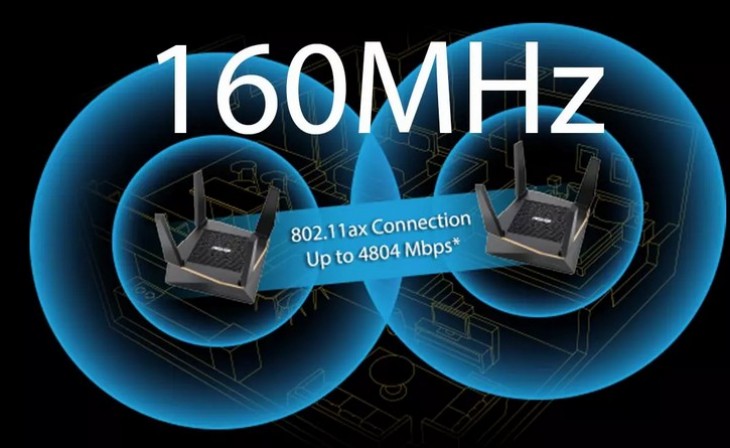 What is 160MHz channel width?

With the launch of the WiFi AC Wave 2 standard, or also known as WiFi 5, the possibility of doubling the channel width available in a router was incorporated, increasing from the usual 80MHz of channel width in the 5GHz band to the 160MHz of channel width. However, with the WiFi 5 standard, it has not been used much, and very few routers have incorporated this important functionality to achieve the maximum possible speed. Something similar happens with the WiFi 6 standard, this feature is "optional", and therefore, not all WiFi 6 certified routers incorporate it, however, we believe that it is one of the most important features that you should pay attention to, with the goal of achieving high wireless speeds.

When we configure a router with 80MHz channel width in the 5GHz band, it means that we are occupying channels 36, 40, 44, and 48 with a single device, because each channel is 20MHz wide. In the case of doubling this channel width, we are going towards the DFS channels that are the 52, 56, 60, and 64 that can also be used indoors. Having double the channel width means doubling the theoretical speed and the real speed of the clients, as long as they also support 160MHz of channel width.

We will notice this additional speed especially in places near the WiFi access point or WiFi router, where we can achieve real speeds greater than 1100Mbps, however, without this feature, the maximum speed will remain around 800Mbps approximately, therefore, if you want to get an additional speed you will have to make sure that your router and WiFi clients incorporate this functionality.

How do I know if my router supports 160MHz channel width?

Another way of looking at it is to learn the different classes of WiFi, for example, AX1800 (80MHz) and AX3000 (160Mhz), and other classes such as AX5400 or AX5700, which do support this 160MHz because the WiFi 6 class is very high, although you will also have to look at the number of antennas. Finally, if a section appears on the router's official website showing the compatible channel widths and we see "160", it means that it supports this WiFi channel width.

We must bear in mind that WiFi clients must also support this channel width, otherwise, we will not be able to take advantage of the additional speed because they will use at most the 80MHz of channel width available on the device.