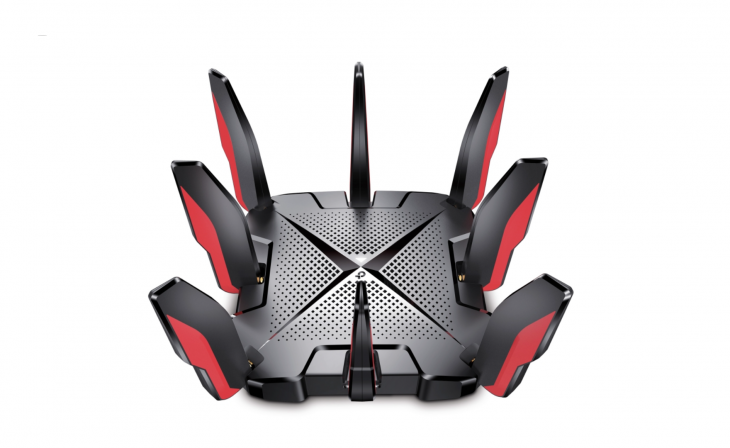 Of course, the router will be used not only by gamers but also by people who transfer large volumes of data, for example, when streaming high-definition video on multiple devices at the same time.

The router supports three frequency bands, so it can reserve one separate band with maximum speeds of 4.8 Gbps to access game servers, so online gamers are assured of smooth gaming even when other household members use the wireless network heavily, such as streaming movies on 4K TVs.

Eight antennas make it possible to use Beamforming technology, i.e. beam modeling. The router supports QAM, i.e. Quadrature Amplitude Modulation, Orthogonal Frequency Division Multiple Access OFDMA, and MU-MIMO (4x4), thanks to which it can provide the connection for dozens of devices simultaneously, without perceptible response.

1024-QAM technology ensures more simultaneously coded data, which increases connection speed. Other technologies that contribute to increasing the speed include eight data streams or a 160MHz channel. Thanks to the 1.5GHz quad-core processor, the router handles all these functions with ease.

The powerful FEM module and 4T4R ensure Wi-Fi signal coverage for large apartments, or for the entire floor of a family house. Archer GX90 also supports OneMesh technology. In case of need for network expansion, a OneMesh extender can be placed in the socket in an uncovered location, thus creating a unified network with one name and thereby ensuring complete coverage without interruptions.

Connected end devices can then switch between signal sources depending on which source is currently transmitting the strongest and most efficiently. If you have terminal devices at home that does not support a wireless connection or if you do not want to use it for some reason, then a cable connection with a speed of up to 2.5 Gbit/s will definitely come in handy.

During testing, we had a NAS server and a gaming computer connected in this way. Other equipment includes four 4K TVs, Xbox, several laptops, and smartphones. There are also two USB ports for connecting a network drive or printer, for example.

Archer GX90 uses the TP-Link HomeCare solution, which makes it possible to achieve a high level of security. For example, there is an adaptive antivirus that maps and detects potential risks in real-time, content filtering through parental control, and QoS (Quality-of-Service) for assigning priority to specific devices. Support for the latest WPA3 encryption standard also ensures a high level of security.

The antennas are connected via connectors, which also ensure a mechanical connection. They can't be tilted, so the router takes up a lot of space vertically, and in order for beamforming to work well, the router needs to be positioned so that there is at least 20 cm of free space around the antennas.

The router is configured either through the TP-link Tether mobile application, which is available for both Android and iOS or through the web interface. You can set a priority for playing online games, streaming videos, downloading large files, or setting the bandwidth for individual devices, such as a game console or PC.

Parental control with predefined profiles for children of different ages is a matter of course, or you can set time limits for children. You can also create a separate guest network. You can view a map of your WiFi network with status and statistical information.

Not only with the equipment of an ordinary user, but also the editor of a technology magazine, who in addition to his devices always has other devices that are being tested, we were not able to even come close to the transmission speed limits.

During the tests, we achieved a transfer speed of up to 120 Mbps. More interesting than the specific transfer speeds, or transfer times of 30 GB files with movies in 4K resolution, is the finding that the transfer speeds were practically the same if the device was in the same room as the router, or in the opposite room of the house behind four walls, namely 116 Mbps.